NanoString's products are based on a novel digital molecular barcoding technology invented at the Institute for Systems Biology (ISB) in Seattle under direction of Dr. Leroy Hood. The company was founded in 2003 with an exclusive license to develop and market the technology. In 2008, NanoString launched its first commercial instrument system and began international sales operations with its first multiplexed assays for gene expression analysis. In 2010, the company launched new applications for the system to support microRNA analysis and copy number variation detection, and in 2013 launched Prosigna™, its first in vitro diagnostic product for prognosis of early stage breast cancer, in Europe and Israel.

Leading researchers and institutions are finding that NanoString's nCounter system provides the ideal platform on which to validate their discoveries and translate them into clinically useful diagnostic assays. The nCounter system is uniquely positioned to support translational research because it provides more reproducible results than methods requiring amplification, and generates high-quality data from the difficult sample types common in clinical research, including Formalin-Fixed Paraffin-Embedded (FFPE) tissues.

In addition to continuing to extend the applications for the nCounter system in the discovery, target validation and routine testing segments of the genomics research market, the company's goal is to become the platform of choice for diagnostic testing based on multiplexed gene signatures that can be offered in hospitals and pathology laboratories worldwide, following appropriate regulatory approvals. These two synergistic areas of business focus provide researchers with a seamless transition from discovery to diagnostics. 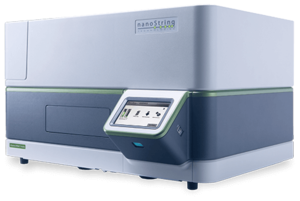 The revolution has begun

A new technology is accelerating cancer research beyond the limitations of RT-qPCR and targeted RNA-Seq. And in so doing, brings the cure to cancer within a string’s reach. 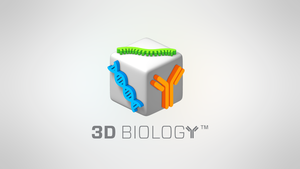 Solid Tumor Profiling
Multi-analyte profiling designed for your solid tumor research. With DNA panels to analyze mutational status combined with RNA and protein expression profiling, you can learn more from less sample. Our assays designed for Solid Tumor profiling are part of the nCounter® Vantage 3D™ portfolio, allowing for multiple multi-analyte assay designs for use with many limited sample types, such as lysate and FFPE.

Immuno-Oncology Profiling
Now you can simultaneously analyze gene and protein expression for up to 800 targets on the nCounter® System. With content designed for immune profiling, the nCounter Vantage RNA:Protein Immune assays give you an integrated view of the biology you’re interested in. Analysis is preformed with as few as 20,000 cells (up to 50,000 cells for PBMCs and primary cells) and this sensitive technique enables you to make new connections while saving time and resources.

OPEN ARCHITECTURE DIGITAL GENOMICS NanoString’s nCounter Elements™ reagents enable digital detection and counting of large sets of nucleic acids in a single reaction without amplification*. They can be used for the development of highly multiplexed Gene Expression or Copy Number Variation assays. 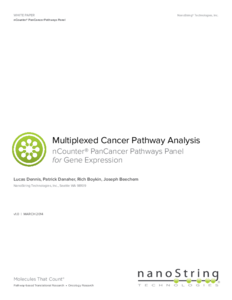 All cancers must evolve a means of sustaining self-sufficient growth and evading apoptosis1,2. This process typically occurs via the accumulation of mutational events that confer a growth advantage through deregulation of the molecular pathways controlling cell growth and cell fate3. Mutations in over 100 genes are known to drive tumorgenesis and within any given tumor there are between 2-8 mutated “driver genes” modulating the activity of critical molecular pathways4. Studying the deregulation of molecular pathways impacted by mutational events as well as monitoring expression of these driver genes is critical to gaining a complete understanding of the biology underlying cancer. Molecular pathways are an attractive organizing principle for analysis of gene expression data as they provide a means to combine the noisy information in individual genes into stable and meaningful representations of fundamental biological processes5. Gene expression profiling has long been used within the cancer field to stratify cell populations and classify tumors6–8. This powerful ability is largely due to the fact that the gene expression state of a cell or tissue contains information about the biological processes occurring within a sample9. Pathway-based analyses provide a holistic view of the changes to fundamental biological processes allowing for deregulation of regulatory pathways to be linked back to “driver gene” status. 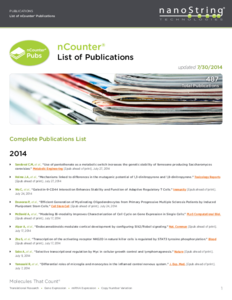 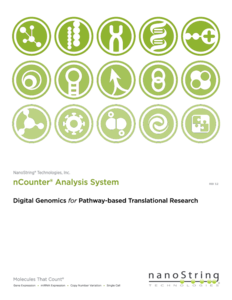 Digital Genomics for Pathway-based Translational Research NanoString’s nCounter® platform is a complete solution for digitally detecting and counting large sets of molecules in a single tube. For translational researchers studying pathways or validating hypotheses generated on discovery platforms, the nCounter Analysis System is the ideal solution.