The most comprehensive product portfolio for adenovirus [PDF] 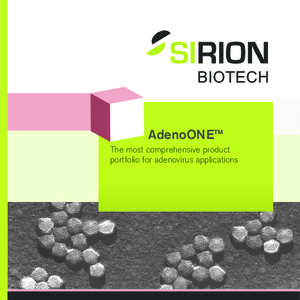 Adenoviruses are non-enveloped double stranded DNA viruses (36 kb) with an icosahedral structure. In total, more than 50 different human serotypes are known so far. Most of the adenovirus mediated diseases in humans are mild acute respiratory, gastrointestinal and ocular infections with a high rate of infection. Recombinant adenoviruses have become a standard tool in gene delivery in vitro and in vivo, vaccination and gene therapy. Several features of AV biology have made such viruses the vectors of choice for these applications. A striking advantage is their highly efficient gene knockdown and overexpression potential into nearly all eukaryotic cells, even primary cells independently whether dividing or not. Since viral titers can be titrated easily, highly reproducible results can be obtained and hence, standard variations minimized. Adenoviral gene delivery is transient, since after infection, DNA is transferred into the nucleus and persists in epichromosomal DNA which is not accessible for the host replication machinery. SIRION BIOTECH`s adenoviral vector platform is based on the genome of the human adenovirus serotype 5 (Ad5). The company ‘s proprietary AdenoONE Bac recombination system combines both the positive and the negative selection. This restricts the number of recombination events to 1, resulting in a cloning efficiency higher than 98%. Furthermore, patent pending BAC technology guarantees production times of less than 6 weeks from cloning to final virus preparation and highest product purity. 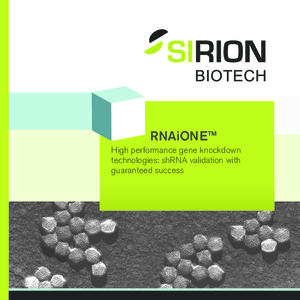 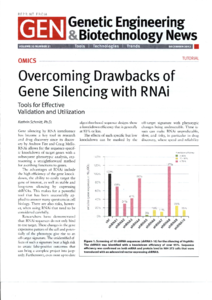 Over the years SIRION Biotech has developed its base technology into an art: in 80% of recent projects SIRION Biotech managed to identify shRNAs with knockdown results of above 90%. Such experience makes it possible to issue warranties with its quotes.

Man in a petri dish [VIDEO]

SIRION Biotech licences rights to CEVEC Pharmaceuticals' immortalized suspension cells derived from primary human amniocytes for its range of viral vectors Munich, Cologne, SIRION Biotech announced today it is now providing viral vectors for preclinical use to be expressed in CEVEC’s CAP®-Technology. CAP® cell lines are designed for stable and transient protein production and achieve highest protein yields with authentic human glycosylation patterns. Adenovirus and AAV vectors expressed in CAP® cell lines not only allow for higher yields, they also meet most stringent safety requirements when it comes to material to be used for clinical trials.
SIRION BIOTECH GmbH 19. September 2013