Finally, on 25 September 2017, the European Commission voted in favor of the market approval of Jennewein’s 2‘-fucosyllactose in the European Union, 4 years after the dossier was submitted (and in the wake of that further approvals in countries such as Israel, Singapore and The Philippines have followed).

Breastfeeding reduces the risk of infectious diseases in children by up to 50 %. HMOs play a major role in this process.

Jennewein Biotechnologie is the pioneer and inventor of a unique fermentation process for the production of HMOs* identical to those present in human breast milk. Now, non-breastfed babies also have the opportunity to profit from the beneficial effects of HMOs.

* not from human milk. 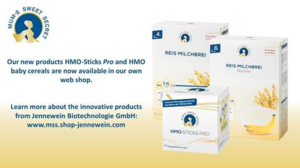