Lexogen is an ambitious biotech start-up with unique proprietary expression profiling technologies that enable detailed profiling of the complete transcriptome as well as individual full length RNAs of interest.

Lexogen was founded in 2007 and is funded by both private capital and public funds. Lexogen is supported by the Austrian Research Promotion Agency FFG, the Austria Wirtschaftsservice AWS, INiTS and the Wirtschaftsagentur Wien.

Lexogen employs 28 scientists and staff and is based in Vienna, Austria. 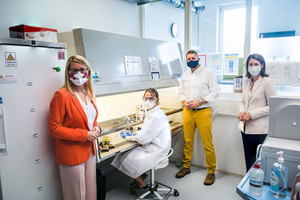 This week the Austrian Minister for Digital and Economic Affairs Dr. Margarete Schramböck accompanied by Managing Director of the FFG Dr. Henrietta Egerth visited Lexogen’s headquarters in Vienna to inform about the progress of the development of the novel SARS-CoV-2 test for mass screening. Dr. Schramböck attended the presentation and demonstration of the workflow of the test method, and had a guided tour through the Lexogen facilities. 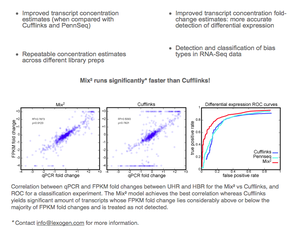 Mix², a new algorithm for accurate quantification of transcript isoforms in RNA-Seq data

Fragment bias in RNA-Seq poses a serious challenge to the accurate quantification of gene isoforms. The novel Mix² algorithm makes no assumption about fragment bias but fits a mixture model to the data, thus inferring the bias automatically. Mix² model leads to considerably better correlation between known and estimated transcript isoform concentration than Cufflinks and PennSeq, which results in substantially increased accuracy in the detection of differential expression. Further details can be found in the manuscript on BioRxiv.

All applicants will be given a stand-alone executable of the Mix² software for free use on their own RNA-Seq data.

Reports - We ask the participants to submit reports in free format including results generated with the Mix² software. The emphasis of these reports should be on the comparison with their previous algorithms. 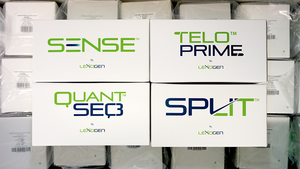 Have you done your Christmas gifts shopping yet? And what about your lab? Is it ready for 2015?
Just 14 days are left before 2014 Year-End Special Offer on all RNA-Seq products of Lexogen expires.

Hurry up and get all the reagents you need for your RNA-Seq experiments in 2015 already now at a special price!

The QuantSeq protocol generates NGS libraries of the sequences close to the 3’ end of the polyadenylated RNA within 4.5 hours.

SENSE is an all-in-one >99.9% strand-specific library prep protocol designed to produce mRNA-Seq and total RNA-Seq libraries in less than 5 hours.

The SPLIT RNA Extraction Kit enables a fast and highly efficient extraction of RNA that is free of genomic DNA contamination without usage of DNase. The RNA can be recovered as total RNA or split into two fractions, large RNA and small RNA.

Learn more about our products 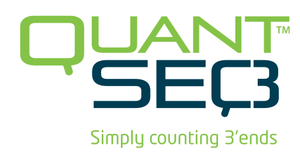 QuantSeq 3’mRNA-Seq Library Prep has been automated on PerkinElmer Sciclone/Zephyr Workstations 3’mRNA-Seq with minimum manual intervention for cost-effective, fast, accurate gene expression analysis and 3’UTR mapping Lexogen is glad to announce the launch of autoQuantSeq on PE Sciclone/Zephyr, which is an automated version of the QuantSeq 3’mRNA-Seq Library Prep protocol and uses the same kit reagents. Hence, it features automated all-in-one library preparation protocol designed to generate up to 96 Illumina-compatible libraries of the sequences close to the 3’ end of the polyadenylated RNA within just 7 hours. Automating the process of library preparation has the advantage of avoiding sample tracking errors, dramatically increasing throughput and saving hands-on time. QuantSeq will be further automated on all major liquid handlers used for Next Generation Sequencing library preparation.

The new QuantSeq 3’mRNA-Seq Library Prep is the best alternative for microarrays and conventional RNA-Seq for gene expression analysis and eQTL studies, and a great tool for detection of the 3'UTR. Lexogen has launched the QuantSeq 3’mRNA-Seq Library Prep kit. This protocol generates Illumina-compatible libraries of the 3' end of transcripts from 100 pg - 2 µg of total RNA within 4.5 hours. As only one fragment per transcript is produced no length normalization is required, and an accurate determination of gene expression values is possible. Sequencing from the poly(A) tail makes it furthermore possible to assess the exact 3'UTR. By maintaining the strand-specificity (> 99.9%) the protocol allows an efficient detection of the antisense transcripts, overlapping and fusion genes. With the high level of multiplexing (96 samples/lane) and the low price per reaction, QuantSeq is an cost-efficient alternative for gene expression analysis. 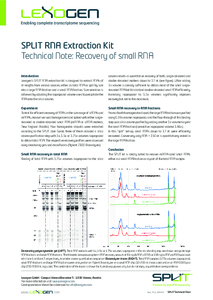 Lexogen’s SPLIT RNA extraction kit is designed to extract RNAs of all lengths from various sources, either as total RNA or split by size into a large RNA fraction and a small RNA fraction. Size-selection is achieved by adjusting the isopropanol volume used to precipitate the RNA onto the silica column. 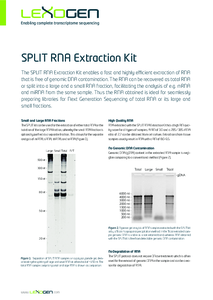 The SPLIT RNA Extraction Kit enables a fast and highly efficient extraction of RNA that is free of genomic DNA contamination. The RNA can be recovered as total RNA or split into a large and a small RNA fraction, facilitating the analysis of e.g. mRNA and miRNA from the same sample. Thus the RNA obtained is ideal for seamlessly preparing libraries for Next Generation Sequencing of total RNA or its large and small fractions. 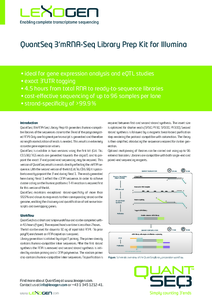 QuantSeq 3‘mRNA-Seq Library Prep Kit generates Illumina-compatible libraries of the sequences close to the 3’end of the polyadenylated RNA. Only one fragment per transcript is generated and therefore no length normalization of reads is needed. This results in extremely accurate gene expression values. QuantSeq is available in two versions: using the first kit (Cat. No. 015.96) NGS reads are generated towards the oligodT, and to pinpoint the exact 3’ end paired-end sequencing may be required. This version of QuantSeq results in reads directly reflecting the mRNA sequence. With the second version of the kit (Cat.No. 016.96) it is possible to exactly pinpoint the 3’ end during Read 1. The reads generated here during Read 1 reflect the cDNA sequence. In order to achieve cluster calling on the Illumina platform a T-fill reaction is required first for this version of the kit. QuantSeq maintains exceptional strand-specificity of more than 99.9 % and allows to map reads to their corresponding strand on the genome, enabling the discovery and quantification of antisense transcripts and overlapping genes. 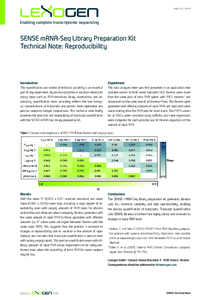 The quantification and control of technical variability is an essential part of any experiment. By minimizing technical variation introduced during steps such as RNA extraction, library construction, and sequencing, quantification more accurately reflects the true biological concentrations of transcripts and permits more repeatable and precise sample-to-sample comparisons. This technical note briefly examines the precision and repeatability of transcript quantification with the SENSE mRNA-Seq library preparation kit 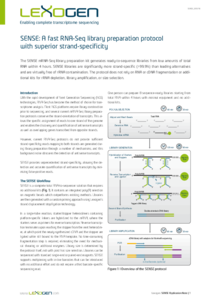 The SENSE mRNA-seq library preparation kit generates ready-to-sequence libraries from low amounts of total RNA within 4 h. SENSE libraries are significantly more strand specific (>99.9%) than leading alternatives and are virtually free of rRNA contamination. The protocol does not rely on RNA or cDNA fragmentation or additional kits for rRNA depletion, library amplification or size selection and is available for Illumina, Ion Torrent and SOLiD sequencing platforms.